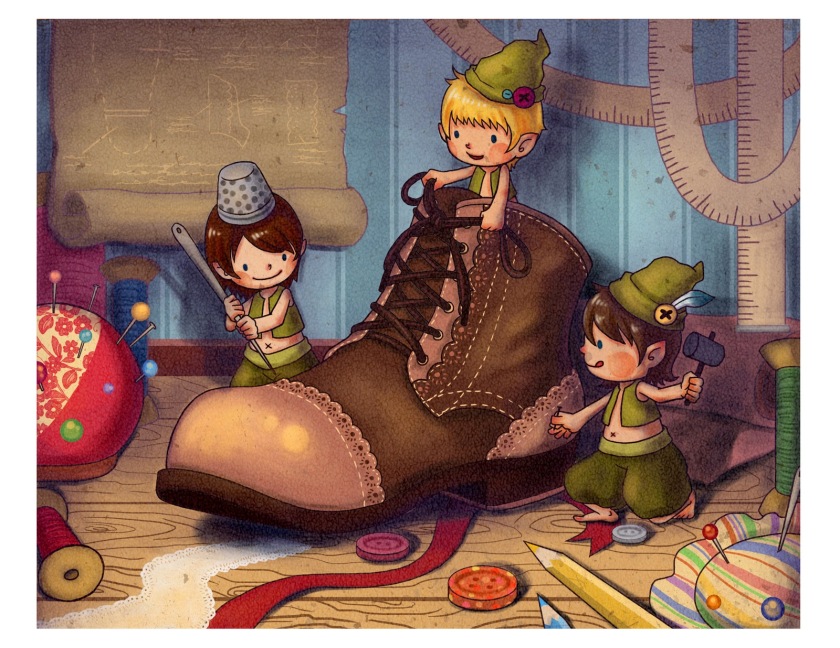 When I was little, one of my favourite stories was The Shoemaker’s Elves. The image of all those helpful little elves popping over to make a shoe or two as the Shoemaker slept. Industrious little critters really.

As I got older I began to understand that Shoemaker’s Elves were rarer than hen’s teeth. Whenever I got stuck doing an assignment for school I’d go to bed, wake up the next morning and find they’d not had the time to help me by writing it.

I guess they’re just not that academically inclined. I’ve yet to find an elf happy to write my novel for me when I sleep either. I’m a little offended by this. I mean, writing a novel is just as creative as making a shoe. I guess the elves have a fetish for footwear – not that there’s anything wrong with that.

Writing a novel is the most time consuming experience. I love to read, I always have. I can knock over pretty much any novel in a few days when I’m reading it. Not War and Peace though, that’s been on hiatus for about 15 years but I’ll get there one day.

I always feel slightly guilty finishing a novel quickly. More so since I began to really understand what goes into creating and crafting a finished book. Darkened North is my first foray into writing a novel. I’ve written screenplays before. They are relatively easy. Need a location, google it, write what you see. Novels – particularly Fantasy ones – are slightly more problematic.

The other day I was describing a characters death. It was suitably gruesome, although I could definitely take some tips from the Show Runners of Game of Thrones about how to kick your audience simultaneously in the heart, head and nether regions. I needed something to combat the magic my characters have, otherwise they’re going to be invincible.

So I came up with a gold Flying Scorpion – as you do. The scorpion works on a different magic system and feeds on the power of the main characters of the novel. My first realisation here was I needed to create a second, different, magic system. The second realisation was I’ve just made my story so complicated I needed a good lie down. It’s days like that I regret quitting drinking.

With the deadline for the novel looming I’ve been working on it daily but the sheer amount of time I find myself popping over to google to see if I can find some fact or other to lend the world authenticity is mind boggling.

Writing a long form novel is hard work. I always assumed it would be, but I never realised how many little details were so important. The food the characters eat, the foods to avoid. The journey they undertake, how far can a horse move per day? In Darkened North they don’t really ride horses. They ride long-haired camels. That was an interesting journey into information I never thought I’d need.

I’ve also finally understood the adage of “write every day.” It’s not about anything other than consistency. Today I have a headache. A really blinding one. It feels like there is someone inside my head trying to push my eyes out of my face. It’s not pleasant. I’m also working from home, which makes it temptingly easy to curl up on the bed and snooze. But I can’t. Even after I’ve finished my work day, I have to write.

The story needs to be your priority. I would love to curl up on the bed, nurse my headache and zone out. I can’t. No one else will write my novel, and at this stage – with no publishing contract and no one even knowing the book is being written – no one else cares if I write it or not.

If I don’t write Darkened North the publishing industry won’t collapse in a heap. The readers of the world won’t unite in grief and misery. The world will keep on spinning. Giving yourself permission to write, and holding yourself to the task is the only way I know to actually finish it. And to be honest, finishing stories isn’t my strongest suit.

When you finally make the commitment to yourself that your project is worth it – the time, energy, lack of social life, sobriety – you find yourself unwilling to entertain the excuses you would have accepted in a heart beat just a few months ago.

I guess it’s probably for the best the elves haven’t been popping over of a night to help me out. They should stick to shoes, they’re good at them. I’ll stick to Darkened North who knows, maybe one day I’ll be good at writing novels too.