Remember the days when to meet someone you had to something strange and surreal like leave the house, maybe join a community group or even nag your friends into hooking you up with the hot guy no one knew was gay or straight? Dating seems to have come a long way baby, but frankly I can’t tell if it’s a good long way, or  a kind of deconstructed long way, similar to what you see on those cooking shows where they make a deconstructed salad that’s an empty plate.

Back in the days of dinosaurs, Gay.com was the online equivalent of today’s dating scene. I never really dated on it. Just ran around the chat room showing my skills at grammar, flirting and shit-stirring. I remember once getting a permanently banned from a chatroom called “A Clean White Christian Chatroom NO Darkies Allowed” but frankly that was the intention of my friend and I going there in the first place.

Dating back then was more confined to the realms of work, clubs and the occasional “blind date”. Today, with the invention of Smart Phone Technology there are a plethora of ways to meet new people.  Examples the gay community seem to use include; Grindr, Growlr, Scruff, KIK, Snapchat, Boys Ahoy just to name a few. Of course the regular websites also have apps so all in all finding out if the hottie next door is on your team or not has never been easier.

The whole purpose of these apps doesn’t appear to be dating or getting to know you. They’re fast food sex. Easy, probably bad for your health and all about the hook up. Dating – like conversation – appears to be too old school for the market today. The boys – and frankly they’re all so young they may as well be lol – are all impossibly pretty, with perfect bodies. It’s like wandering through an Abercrombie and Fitch catalogue.

I’ve been called an “old fashioned gay” by more than one person in my life. I am. I wasn’t always. When I was younger, I had the self esteem and self destruction streak of a suicidal lemming. Some mornings I’m surprised I made it this far. I “dated” – and by dated I mean went home at last drinks with whoever would have me – because it left me feeling wanted. Been there, done that, bought the anti-biotics to prove it so to speak.

The “dating” apps of today have made it all so readily available. It’s on tap. If you fit the requirements. One thing that amuses me is to read the profiles that say “no fatties, no oldies, no asians”. There’s been a debate in the Gay Community for years about whether things like that are racist, or any other ist word that fits. Half say “it’s all about being honest” the others say “it’s just discrimination and you suck”. Either way, the way these guys write things amuses me. I often find myself wondering how they ever hook up with anyone, but I suppose every generation falls for the “treat em mean, keep em keen” philosophy.

One thing I do find myself concerned with though is the ease with which nudity hits your phone. What ever happened to mystery, to dating, to taking it slowly and building a relationship. KIK was the worst for that. Not least of which because I lost count of the amount of people who opened a “conversation” with a close up of their privates and then complained, like I’d stolen their favourite shoes when I failed to reciprocate.

Frankly if you open with a shot of your nether regions without even a “hi how’s it going” don’t be complaining if my follow up to your second message  “got pics” is either “no” or a picture of me wearing a shower cap. And yes, that’s usually what I send. People have no sense of humour anymore.

Now, don’t get me wrong. We all make the occasional mistake, particularly if enough wine is involved. If I know someone and I’ve developed trust with them, I may or may not have sent a pic with the shower cap more strategically placed – or nowhere to be found. But nudity as an opening line has never really been my strong point.

The other surprising thing – at least for me it was – was the amount of underage people who don’t hesitate to send nudes to people. I can’t tell if it’s pride in themselves or a complete lack of self esteem and need to be validated by anyone, anywhere, no matter how old they are. I got to a point, before I deleted the damn thing altogether of having my opening response being “Hi, How Old Are You?”

So as Dating has moved online with the ease and availability of having the internet in your pocket, I can’t help but wonder “Whatever happened to romance?”

Is dating an archaic concept that is relegated to old timers, sitting in the pub, drinking a sherry and remembering the “good old days when cigarettes were just $17 a packets and you could buy a loaf of bread and carton of milk for a bank loan of $10,000 + interest”? Do people date at all anymore or do they just reach into their pocket, send or collect a few intimate photos of the guy down the street and move on?

The older I get the more I believe that Smart Phone Technology isn’t really all that smart. I miss having conversations. I miss the sense of adventure and excitement of preparing for a date. The sense of “will they like me” as I arrived. I don’t know that I like having a ready stream of people in my pocket. Maybe I’m just getting old.

And to the parents who read this blog, check your kids phone. If they have KIK on it find out what they’re sending, and to whom. You’d be surprised at the age of some of the people who thought it appropriate to open their message to me with a nude shot and the word “Hi”, I know they sure as hell shocked the shit out of me.

How have your online dating situations turned out? Leave a comment below if you have an amusing story to share. I’d post mine, but frankly, I don’t really seem to get the hang of this new modern online thingy.

Yes I do have a photo of me in a shower cap, it’s a rather fetching blue one with sequins. And yes, that’s usually the one I send lol. Check it below, you know it makes me look good. 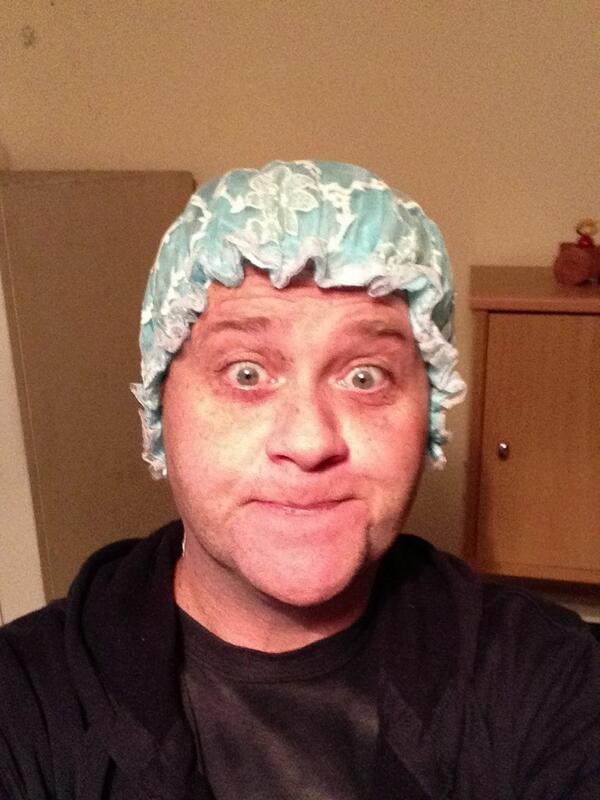